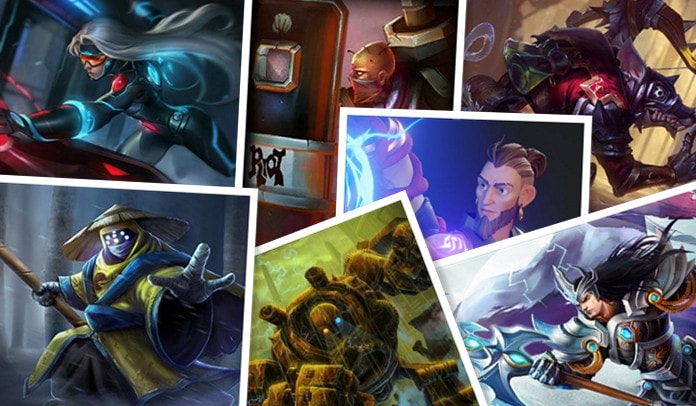 Every LoL player knows how vital skins can be. If you want to change your champion’s appearance, you need to either roll a skin from gemstones in the game or obtain one during special events (or, of course, buy one). Skins come in many shapes and forms, but what are the rarest League of Legends skins?

As you know, not all skins are highly popular. Players love some while they loathe others. That’s why some cost an arm and a leg while others come cheap.

The rarest League of Legends skins aren’t always the most expensive ones, but there’s quite an overlap between the two categories.

Every one of the rarest League of Legends skins has a story behind it that explains why it’s so rare to begin with. They all have an origin story if you will.

The number of LoL skins hit a thousand not that long ago, and it shows no signs of stopping. So, there are plenty of skins out there for you to choose from. However, if you’re aiming for collectible skins or simply want one that not many other people have, there are around 15 of them out there. And let me tell you, getting your hands on one isn’t easy.

Most of the rare skins are those that were handed out at LoL events back in the early days. LoL is now extremely popular, but back in its infancy, it had a handful of devoted followers and a decent fan base. That means not many people got their hands on these skins, to begin with.

Twisted Fate is the rarest LoL skin out there because they discontinued it way before LoL had the millions of players it does now. Back in 2009, all attendees of the PAX event got one of these bad boys. However, there were very few of them (less than 50,000 attended, and only the first 20,000 got the codes).

So, today only a little under 0.4% of players have this skin. PAX Twisted Fate is so rare that most LoL players (especially new ones) never even had the chance to see the skin in the game.

That has done nothing to diminish its popularity, though. PAX Twisted Fate is the most popular one out of all of the rarest League of Legends skins on this list, which explains its price.

When: 2010
Why: This skin was the ultimate reward in the “Refer a Friend” program.
Value: N/A
How many players have it: N/A

Back in 2012, LoL had a referral program that had one ultimate prize. If you managed to refer 350 friends and get them to play LoL, you’d get a handsome reward (the Medieval Twitch skin). This prize was all the rage back then because not only was the skin highly exclusive, but players also got to take part in the design.

The referral program lasted from 2012 until 2015, when the company discontinued it (as well as the skin codes). During those three years, not many players managed to get to the magical number of 350 friends, which is what ultimately made this skin so rare.

However, quite a few players later found the skin in the capsules as a part of the new Honor Capsules system. That made it more available and not as rare as it was back in 2012, for example.

When: 2010
Why: Gamescom 2010 handed out these skins as party favors. They were also later available in the store, but the company quickly discontinued the codes.
Value: N/A
How many players have it: 0.26%

Like many of these skins, Riot Squad Singed was also a party favor. Back in 2010, game developers and enthusiasts who attended Gamescom got these skins as a free gift.

There are very few accounts today with the Riot Squad Singed skin. You could find this particular skin in stores from time to time, but the company has since discontinued the codes. Therefore, it’s still rare, but not as rare as Twisted Fate.

It’s also not as popular. Although you can’t get the skin codes anymore, you can find accounts that have this skin and get them quite cheaply. Remember, just because something is rare doesn’t mean the fans and players are crazy about it.

When: 2009
Why: This skin was so uninteresting and had low impact, so it was quickly taken down and was never available for purchase again.
Value: $400
How many players have it: 0.2%

Another skin that proves that not all rarities are worth your time and money is the Rusty Blitzcrank. This is a very low-impact skin that left those few players who bought it underwhelmed. It was also quite similar in appearance to the regular Blitzcrank skin, which is why many players passed on buying it back in 2009.

As a result, the skin was quickly taken down from the stores and is now one of the rarest League of Legends skins.

Much like the Twisted Fate and Jax skin (which we’ll get to later), the Sivir skin was a party favor during the 2011 PAX Prime event. This is also the last skin that was a gift for event attendees.

When: 2009
Why: Only the lucky few thousand who ordered LoL’s collector’s edition got his particular skin as a little thank you from the developers.
Value: $550
How many players have it: 0.26%

Even though it’s basically just the Alistar skin in a different color (black, of course), this skin is still as popular today as it was ten-plus years ago. It’s also quite pricey.

I’ve already mentioned PAX Jax skin because it’s one of the three PAX skins that were handed out to PAX Prime attendees. In 2010, PAX Jax skin was all the rage, and attendees who didn’t play LoL sold their Jax skin codes at quite hefty prices.

However, Jax isn’t as rare a skin as Twisted Fate because it was actually available during two other events aside from the PAX Prime in 2010 (PAX East 2010 and PAX East 2011).

Still, even though it’s not the rarest skin out there, PAX Jax is still quite popular and in demand. It’s an homage to Penny Arcade, a comic written and illustrated by the PAX founders which makes it near and dear to many players’ hearts.

Another preorder gift, Young Ryze skin, is as popular as it is rare. Players love it because it shows the magnificent Ryze in his human form. In fact, this skin is the only one that showcases this aspect of the Rune Mage, which explains the popularity.

Just like with Black Alistar, Young Ryze was a thank you for everyone who pre-ordered the collector’s edition of LoL. Therefore, around 65,000 players out there might have this particular skin (although the number is probably significantly smaller than that).

Victorious Jarvan IV is a special type of skin because it wasn’t a party gift or a thank you present. Instead, players only got their hands on this exclusive skin if they came out on the other end of Season 1 of LoL as a Gold or Platinum player. Back in 2011, not many players managed to do this.

There are four other versions of the Victorious skin that high-ranking players got in subsequent seasons. However, this one is the rarest because back then, there weren’t that many players around.

Victorious skins (Jarvan IV included) are never available in stores, nor will the company hand out codes at parties or celebrations. You can only get them by playing the game and achieving a high rank, which is what makes all of them somewhat rare.

When: 2009
Why: Beta testers of the first version of League of Legends all got a King Rammus skin as a gift for their efforts.
Value: $30
How many players have it: 0.75%

The last of the rarest League of Legends skins on this list is also the most peculiar one. For starters, King Rammus is perhaps the oldest skin on this list. Why? Because it was a thank you gift for players who participated in LoL beta testing.

So, King Rammus only graces the accounts of players who have been there right from the start. What’s more, because the company added the skin to the player’s accounts automatically, there are no codes for this skin. That means that people couldn’t sell them. This, in turn, increases the rarity of the King Rammus skin.

This skin is a nod to the fan-favorite Super Mario game, which is why many players like it.

Although all ten skins on this list are super rare, not all of them are as good or even as popular. What’s more, some are far cheaper than others, as their rarity doesn’t really mean much.

So, if you’d like to get one, you don’t necessarily have to spend a lot of money. Of course, most of the codes for rare LoL skins are no longer active. However, don’t despair! You can look into getting an account that has the specific skin you’d like to have.

So, you can get one of the rarest League of Legends skins and have other players fawn over your champion’s appearance.

What Is The Rarest Amiibo? And Other Rare Amiibos You Should Know About
A Comparison Guide for the Best PRS Guitars

Want To Ensure The Right Mental Health: Things You Must Do

8 Rare Pokemon Cards Worth Looking For

22 Jobs for 14-Year-Olds: An Early Start to a Successful Career

How To Implement Lean Manufacturing In Your Facility

Romance On The Road: 6 Road Trip Ideas For Couples

7 Stages Of Gaslighting In Relationships: The Disturbing Truth

A Comparison Guide for the Best PRS Guitars