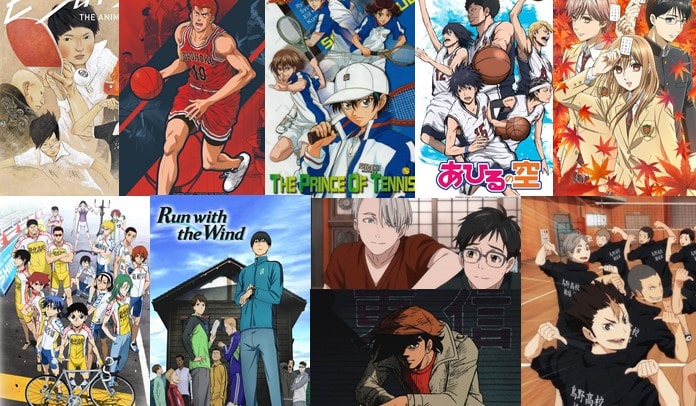 Thrilling, engaging, and inspiring — that’s what sports anime are all about. With cleverly crafted stories, beautiful background settings, and vibrant animations, sports anime can enthrall sports fans and newcomers alike.

If you’ve been thinking of binge-watching this genre, I’ve compiled a list of the best sports anime to watch along with information on where to watch them.

Anime are Japanese cartoons that are either hand-drawn or computer-animated.
For Japanese, the term “anime” stands for all animated works, irrespective of origin or style.

For instance, a Japanese person would regard both Sailor Moon and Disney’s Frozen as anime, and not as two different genres. For people outside of Japan, however, anime is synonymous with Japanese animation or any Japanese-styled cartoons.

With distinct production methods that focus less on movement and more on the finer details of settings and camera angles, anime is a class apart. It has adapted well to budding technologies by combining graphic art, cinematography, characterization, and other imaginative techniques.

With sophisticated storylines and themes, anime is a popular form of entertainment in Japan, as well as across the world, for both adults and youngsters.

What Is Sports Anime?

Sports anime is a niche sub-genre of anime that focuses on stories around sports and other athletic and competitive pursuits.

Pulsating, riveting, and full of entertainment, sports anime are both entertaining and inspirational to watch.

Whether you’re a newbie to this genre or an old fan, I am sure you’ll love this curated list of sports anime that features well-written storylines, sensational drama, and vibrant animation.

The classic tabletop sport of Ping-Pong is brought to life in Ping Pong the Animation. Based on the manga by the same name, this is an exciting journey of two childhood friends who are both members of their high school table tennis team.

One is ambitious, confident, and dreams of being the best Ping-Pong player in the world, while the other lacks the drive and motivation to excel. However, their mutual love of the sport bonds them in a beautiful friendship.

Along with exploring the growth and struggles of its lovable characters, the animation is very fluid and portrays the sport of table tennis in a fresh, never-seen-before light.

A pioneer of basketball anime, Slam Dunk created quite a stir when it first premiered. Not only did it have a huge nationwide cultural impact, but it also played a key role in popularizing the game of basketball in Japan.

This classic anime focuses on Hanamichi Sakuragi who joins his school basketball team to impress a girl he likes and then discovers a groundbreaking passion for the sport. But Slam Dunk is not just Hanamichi Sakuragi’s journey but also of other misfits and delinquents who strive to better themselves through basketball.

The anime seamlessly shifts between the sports-centric action frames and the characters’ day-to-day high school shenanigans. Its animation style might seem a little outdated now but the storyline and other elements more than make up for it.

One of the all-time best sports anime, Prince of Tennis is a little different from your typical anime narrative. While most sports anime revolves around an underdog, this series focuses on a twelve-year-old talented star tennis player Ryouma Echizen who joins the Seishun Gakuen Junior High School after moving to Japan from the West.

Seishun Academy is home to elite tennis players and young Ryouma has to face a lot of hurdles to prove his mettle in this prestigious school. Ryouma longs to get out of the shadow of his father, a legendary tennis player, and become Japan’s best tennis player. Does he succeed? Well, that’s something you’ve just got to watch to find out.

Unfortunately for Sora though, he’s not very gifted in the height department and that makes things slightly more difficult for him. Not only that, his high school basketball team is a breeding ground for delinquents. This is one of those tried and tested underdog stories that’s honest and innocent and definitely worth a watch.

If you’ve ever felt dejected from failure, Yuri!!! On Ice is the perfect sports anime to watch. Yuri!!! On Ice’s stellar animation brings to life the beautiful sport of figure skating, complete with all its nuances and technicalities.

With its refreshing depiction of homosexuality along with the subtle and scintillating romantic angles, this anime’s sure to captivate you.

Yuri Katsuki is a Japanese figure skater who, after a series of losses in many competitions including the Grand Prix finals, considers retirement and returns to his hometown.

However, in a turn of events, Yuri Katsuki finds himself back in the game when one of his past performances goes viral and Victor Nikiforov, a five-time world champion, offers to mentor him and rekindles his passion for the sport.

Ashita No Joe is a story of a delinquent named Joe who wanders around the slums of Tokyo. One day, a drunken boxing trainer takes note of Joe’s fighting moves and thinks it can translate well in the squared ring.

This is a great underdog tale that is very reminiscent of the Rocky films. You see the transformation of a young guy who goes from slums to prison and finally to the bright lights of the boxing ring. This series has had such an impact on the anime and manga industry that you see influences of it in other works as well.

Spanning over several seasons and OVAs, Chihayafuru focuses on a traditional and intriguing Japanese card game called karuta. This card game is an official sport in Japan that’s both mentally and physically demanding.

Chihaya Ayase, our headstrong and determined female protagonist, stumbles upon the game of karuta when she meets the transfer student Arata Wataya. This fateful meeting changes her life for the better as together with her childhood friend, Taichi Mashima, she forms a karuta club in her high school.

Full of well-developed characters and well-executed plot points, this is an unusual sports anime that manages to hit all the right notes. Its stellar, eye-catching animation is a cherry on top that makes it all the more pleasurable.

Adapted from a novel, Run with the Wind is a sports anime about competitive running. Through a very character-driven story, Run with The Wind has managed to portray the rather drab sport of running in an exciting new light replete with excitement.

Despite a team full of novice runners, Haiji is set on winning the highly competitive university marathon relay races in Japan. After several days surpassing one hurdle after another, Haiji manages to transform his nine dormmates from a bunch of unfits to a group of strong and fit runners.

The anime not only gives an insight into the struggles and heartwarming journeys of the individual characters, but it also beautifully captures the mental catharsis of its protagonist, Haiji.

Yowamushi Pedal is unique in that the protagonist Sakamichi Onoda is not passionate about the sport but is rather pushed into it by chance.

Sakamichi badly wanted to be a part of the anime club, which was unfortunately dispersed. However, his natural flair for cycling manages to catch the attention of two dedicated freshman cyclists — Naruko and Shunsuke Imaizumi.

They convince Onoda to join the bicycle racing club of their high school. This sports anime explores the nuances of a community held together by meaningful bonds and shared passion. This is a heartwarming story of passion, struggle, heartache, and motivation backed by a strong technical presence full of pleasing visuals.

Can a list of best sports anime ever be complete without this classic?

Even years after its debut, Haikyuu is probably the most popular anime of our time, and for good reason. It’s so inspiring and motivating that you might be tempted to hit the volleyball court right away, even if you’ve never smashed a ball before.

The story revolves around the protagonist Hinata — cheerful, dedicated, and skilled at succeeding in everything he puts his mind to. There’s never a dull moment in this anime that intricately explores the backstories of all of its characters and wonderfully captures the gripping on-court actions of a volleyball game. This is one anime that’s sure to have you glued to the screen.

Where to Watch Sports Anime?

You can watch sports anime on various platforms. Some of the well-known ones are:

· Which Sports Anime Are There on Netflix?

With Netflix being everyone’s go-to platform for entertainment, you can be sure to find some anime gems there. Here’s a list of sports anime that you can watch on Netflix.

From thrilling basketball matches to a lesser-known traditional card game found only in Japan, this list of best sports anime is sure to leave you breathless with excitement and make you marvel at the art of animation.

Whether or not you love sports, the depiction of bonds of friendship, dedication, and focus are sure to get you hooked to sports anime.

43 Best Anime Pick-Up Lines: These Will Work on Any Anime Fan
7 Manga Like Solo Leveling: Manwha That Feels Like Manga
How Many Episodes Does JoJo’s Bizarre Adventure Have?
8 Best Yuri Anime to Watch: Shows You Cannot Resist

43 XXXTentacion Quotes: An Abuser or a Genius? We’ll Never Know

37 Quotes About Loyalty That You Should Read and Remember

41 Sayings About Being Single to Help You Cope With It

45 Wholesome Irish Sayings: May the Luck of the Irish Be With You

34 Quotes About Choices: Time Stands Still Only Until You Make Them

Moving To Canada From USA: A Comprehensive Guide

Considering A Career In Nursing? Here Is How An Accelerated BSN Can Help

Romance On The Road: 6 Road Trip Ideas For Couples